During the first semester, climate in the Americas had the influence of the event El Niño which began in 2014 and finished on May, 2016, followed by the condition Neutral.  Its effects were felt in some areas of the North, Center and South America. Those were deep droughts together with sectional flooding produced by intense rainfall.  However, it can be said that 2016 was a year of good weather in general terms. This was reflected in the increasing production of several commodities, such as corn, wheat, sorghum, and soy, mainly. Except for Brazil, Canada, United Stated, Mexico and Argentina increased their grain reserves as a consequence of higher yields due to good weather.

As it is showed in Figure 1, the North of the American Continent had excellent rainfalls in 2016, including the presence of the typical droughts in the East and Center of United States. However, California could finally recover from a long period of drought this winter 2016-2017, when there was already abundant rainfall on December 2016 and January 2017.

In Central America the rainfall situation was variable, but 2016 was a year with better weather for agriculture than 2014 and 2015 when there were severe droughts and crop losses, mainly in El Salvador, Honduras and Nicaragua.  In the case of South America there was an important rainfall in the second semester of the year mostly in Argentina, Colombia and Peru. 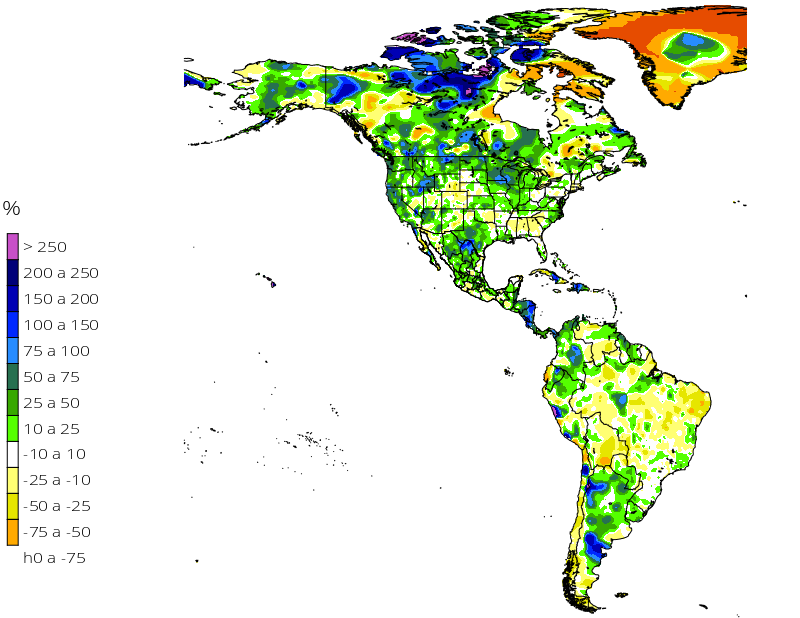 Pacific Ocean has resumed a process of cooling after the generalized warming suffered during 2014 and 2015. This cooling process is mainly observed in the region El Niño 3.4, which was assumed as the entering of the condition La Niña for the end of 2016 and beginning of 2017.  Nevertheless, recent temperature measures of superficial waters in the region 3.4 indicate that the ocean in warming up again (Fig. 2).  The maximum cooling reached had an anomaly of  -0.7 °C on December 2016 but a few weeks after it reported an increase in sea temperature, for which prediction models have estimated that climate in the Americas, at least during the first months of 2017, will be dominated by the condition  ENSO Neutral. It is important to mention that rainfall pattern observed in certain areas of Mexico, Central America and part of South America during the months of November and December 2016 and January 2017 are typical of the phase La Niña: reduction of winter rainfall in Mexico, sporadic rain in Central America and an increase in rainfall in Colombia over the historical average for January; even ENSO indicators oscillate in Neutral.

As regards temperatures, unlike United States of America which is going through a severe winter, Mexico is having a warm winter with isolated scarce rainfall at the Northeast and Southeast of the country, as well as a high solar radiation derived from a dominant regional anticyclone.

The above is showed in Figure 3 which represents the variations of sea temperature anomaly in the region El Niño 3.4. The graphic shows in blue the persistence of the ENSO Neutral phase during the second semester of 2016 and January 2017.  Temperature increase in the last weeks of January has produced climate models to estimate that Neutral condition will remain dominating up to August, 2017. It is important to remember that a Neutral phase associated with climate pattern of the region will tend to its values of historical average as regards rainfall and temperature.

According to the release of climate models from international institutions which provide data to IRI (International Research Institute), it is estimated that the Neutral phase will have a probability of 50% for dominating in the month of August and September 2017 (Fig. 4).  However, the second most probable phase is the condition El Niño, with a probability of near 40%; this is mainly due to the recent warming of the region 3.4.  This pushes us to follow the weekly reports from NOAA on sea temperature and as a consequence, if it is necessary, to review our climate forecasts based on ENSO.

The intention of climatologists has always been to identify the tendency ENSO will take according to the variations of sea temperatures in the last weeks. Currently ENSO is in a transition phase and the percentage of 40% and 50% of probability assigned to El Niño and Neutral, respectively, does not allow for a precise trend of sea temperature. This will be possible within the next weeks. However, it is evident that temperature will keep on increasing and climate will oscillate between Neutral and El Niño.

In general terms, climate oscillation between the condition Neutral and Weak El Niño allows to forecast 2017 as a year of good weather for agriculture, something similar to 2016 as regards rainfall and temperature, taking into account that 2016 allowed Central America a parts of South America to recover their rainfall levels after several years of drought. On this matter, we have to mention that the Amazon registered reduced rainfall but without reaching alarming levels.

Again, a condition of Neutrality will be closer than rainfall and temperature patterns that are similar to local historical average, this also discards, to a large degree, extremely rainy years that are a problem for the farming sector as well. On the other hand, Weak El Niño phase, in which the anomaly of sea temperature of Region 3.4 oscillates between 0.5 and 1.5 °C, the levels of rainfall reduction are not significant (10 to 15%) and it allows satisfactory harvests in dry land crops.

This climate perspective allows us to speculate that world grain reserves will tend to increase in the face of a favorable climate for production. This might have an adverse impact in commodities prices, taking into account that in 2016 food reserve increased (Fig. 5), but there was a drop in product prices. 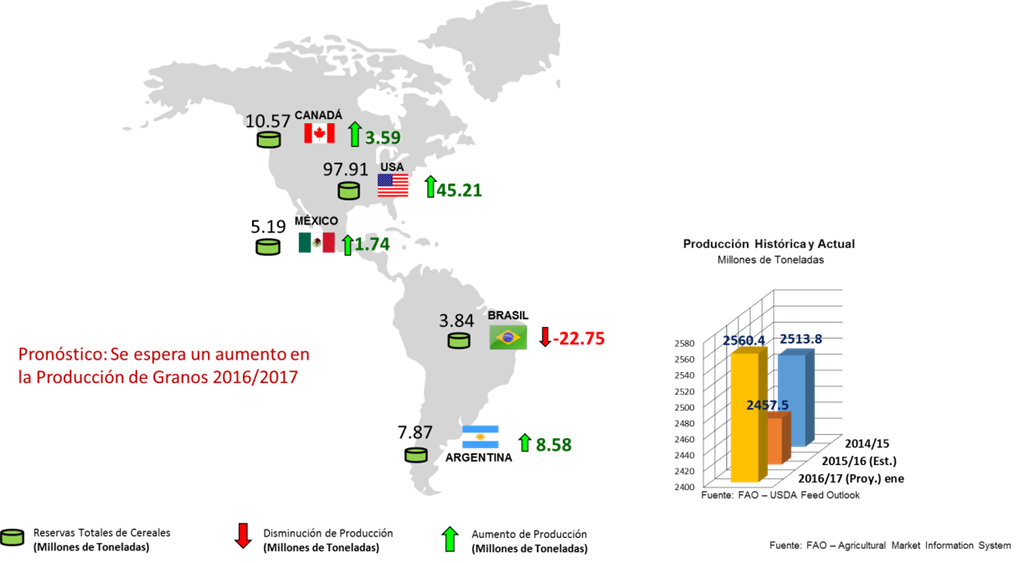