Evidences of climate change impact on the americas | June – August 2016

Even though many skeptics doubt about the existence of the progressive global warming due to the increasing concentration of greenhouse gasses such as, mainly, carbon dioxide, methane and nitrous oxide in the atmosphere; reality is that climate has changed in the last 50 years. This, considering the results of scientific researches that support that the increase of extreme climate events such as droughts, frosts, flooding, more intense hurricanes, tornados, from recent years are related to the planet temperature increase.

In the last 150 years, and derived from the Industrial Revolution, when it started a full and incremental consumption of fossil fuels by the industry and motor vehicles, atmospheric CO2 increased from 220 ppm to more than 420 ppm. It is estimated that in 2020 there will be an atmosphere with a greenhouse gases concentration higher than 500 ppm. Consequently, planet average temperature will rise almost 2 degrees centigrade.

There are many scientific evidence of the impact of global warming over natural resources, for example the progressive decrease of polar caps due to the melting of big ice masses, the rising sea levels, a faster desertification processes, loss of plant and animal species, and mainly an increased climate variability, which lies in the increase of the frequency of temperature and rainfall extreme values.

According to the Intergovernmental Panel on Climate Change (IPCC), the effects of Climate Change are shown in a bigger variation of climate pattern, since temperature and rainfall can reach a lot more extreme values. Occasionally, a high percentage of the annual rainfall can fall in one or two storms and cause localized flooding, while the rest of the year it can be suffered a prolonged regional drought.

On the other hand, Climate Change won´t have a homogeneous effect across the planet. Due to their geographical localization, tropical midlatitude countries will be the hardest hit. This is the case of Mexico, Haiti, Cuba, Brazil, Colombia, Peru, Honduras and Bolivia, which, due to their localization, registered an increase of more than 50% of extreme events that affected housing and population with storms, flooding and droughts in a period of 24 years (Fig. 1). 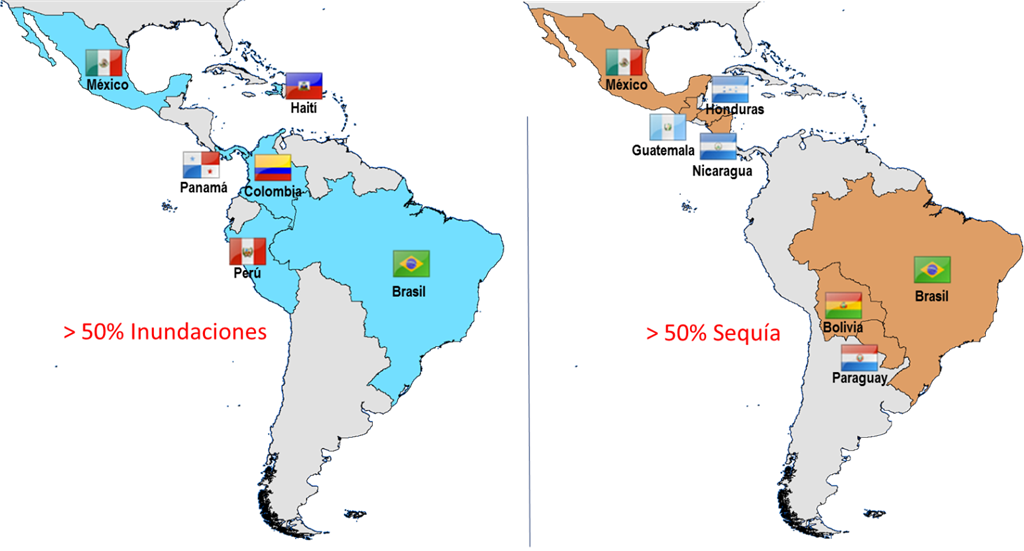 Fig. 1. America’s countries with more than 50% of occurrence of flooding, storms and droughts 2000-2014. Source: Own confection with data from CEPAL

In summary, FAO and World Bank have located countries in the tropical area as the losing countries due to the effects of Climate Change.

As a consequence, these international institutions have recommended “We need to adapt agriculture and cattle raising to the new climate circumstances, which allows protecting productions goods of farmers and of countries in general”.

According to some research reports on the impact of Climate Change, this is reflected in:

Consequently, the producer is obliged to:

It is important to mention that with the use of greenhouse production systems, many farmers are following the protected agriculture so as to reduce the vulnerability of their production systems in face of the impacts of extreme temperature (frost and heat waves). Besides saving water, with greenhouses it is possible to provide nutrients to plants in more precise quantities which allow high yielding in periods of the year that have the best prices for the products.

Unfortunately, this way of production implies high investments for which most producers do not have enough economic resources to venture into an agro business. On the other hand, many extensive crops such as grains, search for the benefit of local weather and establish themselves in big extensions of agricultural soil thus, their production under greenhouses is not economically profitable, and not all producers have access to an irrigation system.

One of the recommendations of the international institutions oriented to the study of Climate Change and its effects in agricultural economy is that new agriculture must protect its production goods, orient production systems to sustainability and achieve resilience (the ability of production units to recover quickly after severe damages and return to production in the short time). That is why, farming insurance is one of the first recommendations for Climate Change by FAO and World Bank, and consequently, farming insurance is the better adopted measure by most of the countries around the world so as to mitigate the effects of Climate Change.

As a consequence, farming insurance tries now to get to more producers, including the ones with lower incomes, by governmental programs that share climate risk by paying part of the insurance premium or through catastrophic insurance implemented by some countries of the region.

Innovative insurances that are purchased nowadays in the agricultural sector based on parametric climate indexes for rainfall in which each millimeter of rain that does not fall millimeter of excessive rain has an compensation cost for the farmer, or insurance that cover the price of the product for sale, with which the farmer assures the income to their fields, allow the protection of production units before extreme climate events and foster the recovery of damage fields, causing a fast incorporation to the productive process.

Some governments have implemented early warning systems and contingency plans together with worldwide institutions to face the challenges imposed by climate change and it would be quite relevant to include innovative schemes of insurance in public policies that contribute to the sustainability of production in those regions where farmers are more vulnerable to the extreme variation of climate in the region of the Americas.