The climate and agriculturañ insurance

Home / The climate and agriculturañ insurance

Global Agricultural Insurance, including that practiced in the Americas, is a strategic response by governments to cope with the onslaught of extreme weather events resulting from Climate Change and that have a direct impact on food production. This is part of a process of adapting current agriculture to the new climatic circumstances of the world in order to mitigate the impacts of extreme events in the socio-economic environment. Crop insurance, today, is already a robust instrument commonly used among the countries of the world for the prevention of crop disasters.

Similarly, insurance companies have been forced to adapt to new climatic circumstances and therefore constantly monitor the development of climate in the various agroclimatic regions. This has allowed timely action to be taken to deal with claims on crops and animals, and also give certainty to the extent of the damage that has occurred in large agricultural regions. In addition, it has been shown that the prompt compensation that constitutes the best mechanism to promote crop insurance before agricultural producers. Without forgetting that the good knowledge of the local climate helps to justify the insurance premium based on the climatic risk to which producers and insurers are ventured.

Remembering extreme historical climate events will be crucial in the programming of agricultural insurance operations in 2015, considering that 2013 and 2014 were years of relative good weather in most countries of the American continent, as the Neutral phase of the phenomenon persists. Child Southern Oscillation – ENSO- (Fig. 1). The recovery of world grain reserves show the benefit of two years of good weather in many countries.

Fig. 1.  a) Registered precipitation, and b) Precipitation anomaly, in the period from June to December 2014 in the Americas.

After a long period of Neutral phase (more than 24 months), it is climatic and statistically highly probable that during the year 2015 the eventual warming of the waters of the Tropical Pacific will resurface. Recent images published by the NOAA (National Oceanic and Atmospheric Administration) of the United States of America (http://www.elnino.noaa.gov) they show an anomalous warming of the waters of the El Niño 3.4 region (Figs. 2 and 3) and that given their high climatic teleconnection with the American continent it is not ruled out that extreme events such as drought, excessive rains, heat waves, etc., they will have a negative impact on crops in regions sensitive to the phenomenon. 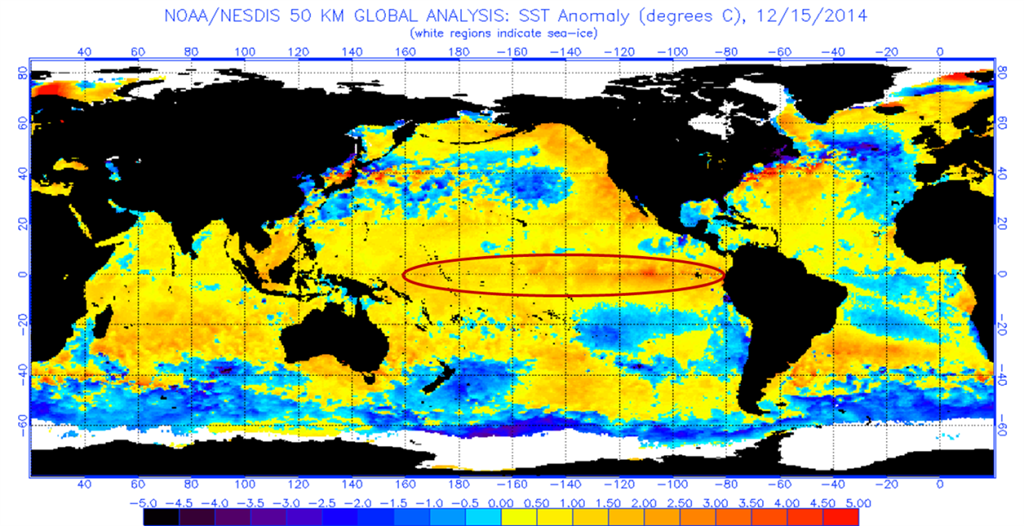 Fig. 3.  Temperature anomaly of the surface waters of the Tropical Pacific in the El Niño region 3.4 (Datos:  http://www.cpc.ncep.noaa.gov/data/indices/wksst8110.for).
The probability of establishment of the ENSO, according to the outputs of the models of the institutions that participate with the International Research Institute (IRI), indicates that the El Niño phase has a probability close to 70% to manifest in the months of January to March of 2015 (Fig. 4). In December 2014, several of these institutions dedicated to the study of climate have already declared El Niño Weak. Although the parameters of the marine current of the Tropical Pacific indicate the current presence of El Niño, its counterpart to the atmospheric current does not yet show the winds that characterize the El Niño condition. However, it is clear that the Tropical Pacific is warming and there is no doubt that its effects will be felt from the first months of 2015, according to the typical effects of the phenomenon in each geo-climatic region.

Fig.  4.  ENSO forecast in December 2014, result of the trends of climatic and statistical models of the IRI community.

Given the well-documented variability in sensitivity to ENSO, it is not enough to emphasize that the agricultural insurance sector must have full knowledge of how the climate manifests in each of the countries of the continent during the El Niño phase. This entails reviewing agricultural insurance records in past years, as well as agricultural statistics regarding the years that the El Niño phase was presented (i.e. 1997, 1998, 2009). This will help to dimension the potential damage of the insured crops.
On the other hand, given the great diversity of opinion in the climate forecasts that appear in the media, care must be taken in the information source and avoid unsubstantiated information that only confuses decision making. Hiring the services of highly qualified climatologists represents an advantage for insurers to reduce uncertainty or base risk of insurance. This is why the main insurers in the United States and Europe, as well as several international reinsurers, have established their own climate department.
It is notable that current agricultural insurance is evolving, by including in its daily operations processes with more scientific foundations: such as weather records, Global Positioning Systems, satellite technology, weather forecasts, plant growth models to estimate crop yields in conditions of climatic stress, etc.
Finally, the best informed insurers will be able to offer better premiums for the producer at a fair price in relation to the risk to which their crops are exposed, especially without risking the life of the insurer in the regional market. Climate risk is not an intangible, it is a reality that can be demonstrated right now, considering that an atmospheric phenomenon will always be forming on the planet that will impact in some country in the next few hours. Many producers, agribusinesses, governments and even insurers have disappeared for not adopting a climate culture in their operations.